In Chachapoyas I met a group of English backpackers on there way down to Huaraz. A place I’d had my eye on since leaving Cuenca.
A climbers haven with around 30 peaks topping 6000 meters (the height of kilamanjaro). We got the beers in and spent the night talking about politics and climbing. Nick who was raised in the states but brought up amongst the filthy rich in Guernsey and now living in London was wonderfully describing what he gets from climbing. He talked of the complete calm and peace of mind when your only real option is to do it. A feeling he was searching for repeating on his trip as the party made their way south. This really struck a chord with me and summed up the next few weeks pretty aptly. Maybe a feeling of focus close to meditation we don’t get so much in a modern western world crammed with choices and options.

I left the super pleasant but painfully touristy vilcabamba looking for a valley absent of outside influence. I stayed in some German resort full of bratwurst and rich kids getting massages. Fortunately the tourist trail had ended after the last road out to the coast. Things turned super quiet and wonderfully rural as the one road pretty much went nowhere. I had been hoping to encounter someone to ride with at some point as the next few weeks were going to be very rural and camping alone had lost its charm. Round a corner of a quiet mountain I found Juan pablo and Luzma. I was pleasantly surprised to find they were Ecuadorian cyclists. I didn’t think there was such a thing and vamos, we made our way to the border. 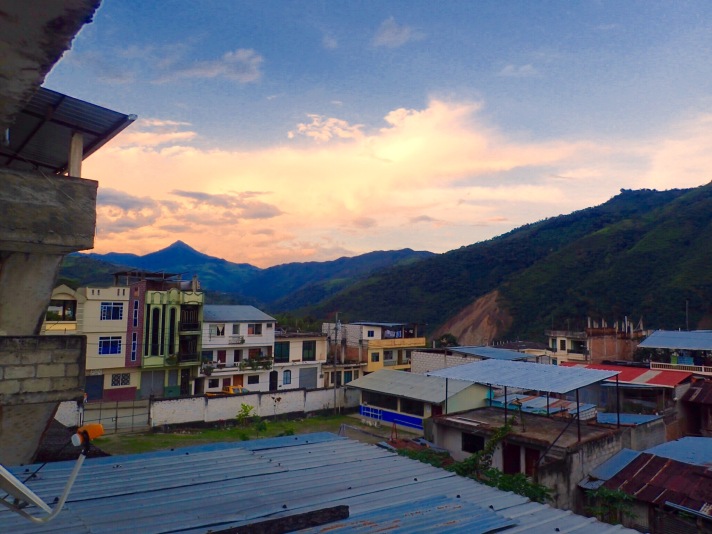 It was supposed to take a day to cycle the hundred kilometres to the border with Peru but that slowly turned into three. The road was barley a road and torrential rains turned it into a swamp. The last day in Ecuador we managed just short of 30k, pushing the bike up a mountain constantly slipping though the mud. When cycling wasn’t an option, with nowhere to shelter pushing the load was the only way to go. Pushing 50 kilos worth of bike and kit up a mountain in these conditions was a sure test of stamina but when that’s all there is to do it’s kind of fun too. Luzma and JP stopped for a final photo on Ecuadorian soil but on the hill in the mud my brakes didn’t do a thing so I couldn’t join them, screaming that I couldn’t stop as I raced down to the border. We made our enquiries to find out how to actually officially leave Ecuador and enter Peru which seemed entirely optional. The border agent asked me how long I wanted to stay, glanced at my passport, told me to shave and into country number twelve.

The difference over the border was immediately noticeable, the houses were a lot more rustic than in Ecuador. Mostly mud and straw and without glass in the windows. Political slogans on every fifth house, I counted six or seven different parties. All claiming something in relation to the farmers, the land or no to mining. Five members of a family to a motor bike, elaborately decorated motor taxis and a back to basics type of existence. Drying peanuts and coffee beans of the roadside which would weave in and out and every which way to navigate crisscrossing valleys.

Out of the high mountains we deceneded back to rio chingala, the same river that separated Peru and Ecuador, expect this time, four times the size. A day straddling its banks was incredibly welcome after pretty much two months in the Andees. The valley was incredibly rich. The first time we stopped to look around was at a corner of four fields, one a rice paddy, the other a banana plantation, the other full of mango trees and one full of gamado. A meal on a corner. The valley was wonderfully fertile, pineapple, oranges, coconuts. A slice of paradise. After putting in my first 100k for weeks me and the Ecuadorians decided to add another half to the next section of our route to skirt the Peruvian Amazon to visit kuelap and Gotcha. The road fell back to dust pretty quickly and we had to haul our bikes across rivers and pay locals to boat us across stretches impassable. 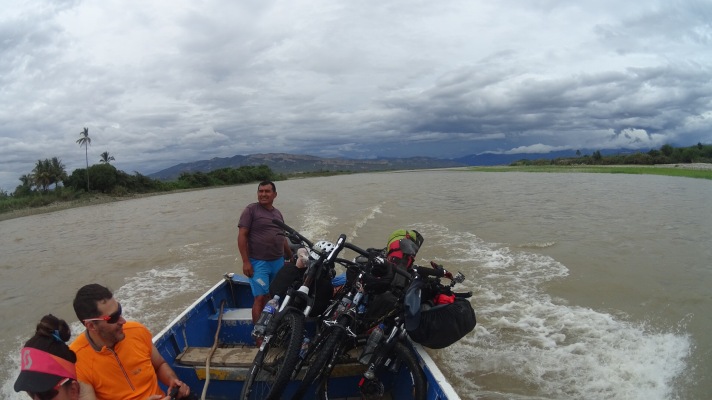 Riding was feeling good and I got a Rythm back but subsequently lost the Ecuadorians as they opted to bus the difficult route in the heat. I waited in the hamlet of Salado and chatted away to some dodgy looking folk. After two hours the night was falling and a lady in the shop told me I needed to leave as the town wasn’t safe. It was hard to believe as id just been watching kids playing and enjoying my time but I thought it best to take her advice. It was either the mountains or a roll back. I opted for a roll back and checked in with the police, they confirmed the ladies claims and put me up for a night. They told me as they didn’t have transport it was hard to respond to much, they had to hitch a ride for emergencies. We stayed up listening to music and I kind of felt bad when there boss came in in the morning to find me sleeping on their floor. Fortunately he seemed pretty excited and treated me to some breads his mum had made, then insisted to take me the next 50k in his truck. I was reluctant to use motor power but since he insisted it wasn’t safe and I’d put an extra 300k on this leg by taking the long way around I reluctantly adorned his truck, pacifying myself with the notion that it was better I did this than loose my bike. This part of northern Peru didn’t have a good reputation being the main route out of the Amazon.

The route, unbeknown to me passed apparently the third biggest waterfalls in the world so I took a little hike with a shaman on holiday from Lima, David and Angie. Having previously planning to skip the capital, they switched my route to include Lima as David had invited me on some spiritual adventures. Another 80k down the way was the ancient Chachapoyan ruins of Kuelap. This was supposed to be a month of kilometres after stalling in Ecuador but touted as more impressive than Manchu picchu I thought I best take a look. Leaving my kit with a friendly couple in the village 10k below I woke at dawn and tracked the 1300 meters to have the entire ancient city to myself but a heard of friendly llamas.Epically statued on a hillside with views of the valleys all around. The chachapoyans knew what they were doing, the city of five thousand or so had buildings a damn site more impressive than those I’d seen of modern day northern Peru. I descended in the afternoon and back on the saddle.

The next few days looked absurd on the map, 200k to do 50k as the crow flies. Of course the peruvians said todo Es Plano, ( all is flat) which I was used to ignoring. The first involved a 30 climb to the highest point of my trip so far the calla calla pass at nearly 4000 meters, arriving freezing my ass of wearing all three of my tshirts, gloves and jacket only to descend sixty k without rotating my pedals once into the fire pit of Balazs at 800 meters. This was Just to cross a river and spend the whole day climbing the other side back to 3000 meters. Despite completely defying logic the route was pretty spectacular with sheer drops off the side of the single track road, drops sometimes of a good kilometre or so. I learnt to wait for the sound of horns and then hug the rock face and the sparse traffic passed, Mariana invited me into her casita perched on the cliff face to drink my new favourite drink, some quinoa based hot drink with cinnamon and pineapple. She lived there with her three sisters cultivating papaya and showed me some of her paintings of the ever changing colours of the valley. I told her I had been trying my luck with drawing and she asked me to draw what I saw, so I tried and she was polite in response. I pushed on and arrived shattered after two days in the full of charm town of celendin. Took a few hours to look around the most varied market I’ve ever seen, with more types of garlic and potatoes you could imagine. Ate the best ceviche and my favourite camote I’d had so far with a toothpick, slept and then moaned in my head about pretty much everything for 100k to finally reach a resting place at the inca baths of Cajamarca. US Peruvian Danny from Long Island invited me to share the bath with him and his family before a pretty young Peruvian took him off instead. I was left with his family in the baths which was a little awkward at first but we hit it off and joked about how big shot Danny had changed since his departure. Peruvians seemed to really like to take the Mick, the state of my hair and red beard bore the brunt of it.

The town that was the deathbed of the Incan empire had more Andean charm not to mention randomly incredible cheese but I had to get out of the mountains for a bit. My direct route east looked like a plate of spaghetti. No straight lines at all. I worked out to do 200k as the crow flies I would have to double that and more. My knee was screaming and my bum too. The temptation of being on the beach was too much so I started the roll down to apocalyptic desert of the Peruvian coast. The wonderfully fertile land turned to a scene from mad max before I knew. Hundreds of vultures rode the thermals of the valley descending to the coast, huge artificial lakes appeared, I presumed to arrigate the no mans land further west. It was startling how quickly Peru turned from idyllically beautiful to a little rabid and ugly. This part of the coast was notoriously dangerous so I put my head down for uninspiring scenery and headwinds and busted it to Trujillo. 1400 k In two weeks and I needed a beer. And to learn how to rebuild a wheel. 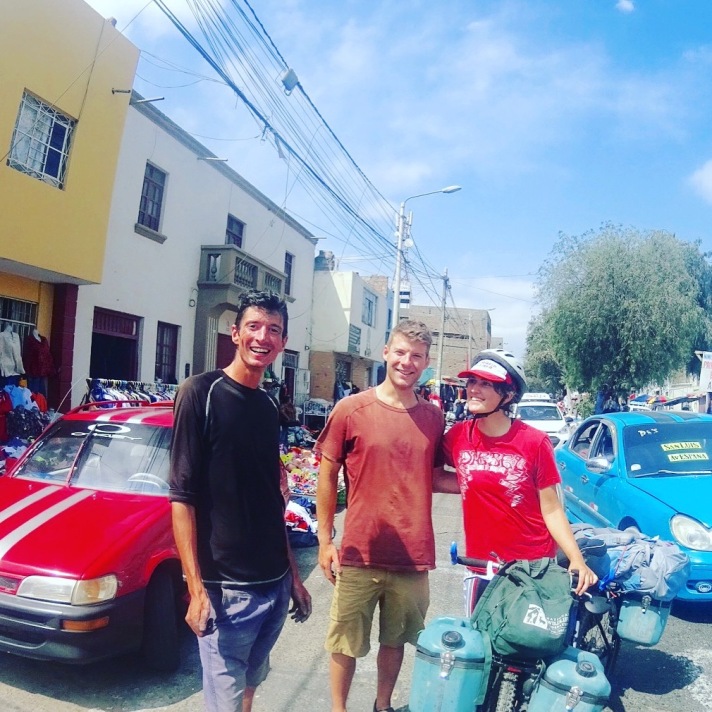