The rest of Ecuador

So I got to Tumbacco, met the friendly bunch who had been added to Santiagos ever extending family and ate some fruit I wasn’t supposed to eat. I picked up a virus which laid me flat for 5 days flat. Santiago was a legend and I stayed long enough to experience my first ever earthquake, a mighty 5.4. The strangest experience which at first I though was just cramp but had us running from the house and the lights of the city turned off, just the sounds of the aftermath. 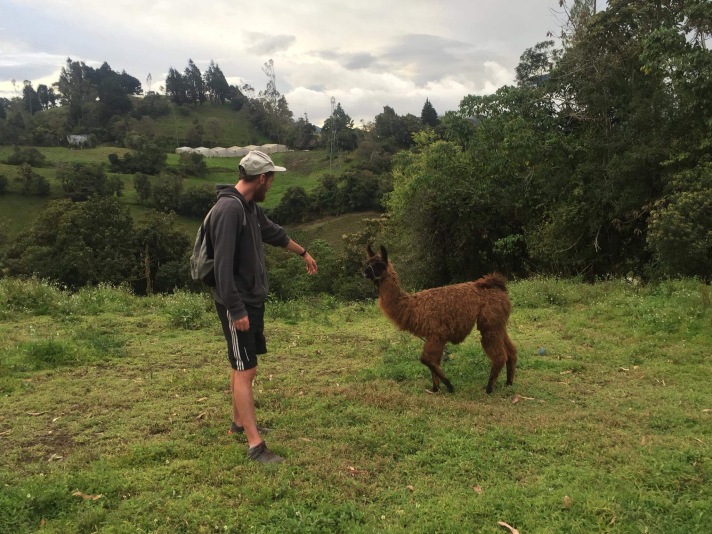 Ecuador was pretty tough to ride though, mainly because I kept following the mountains and took some odd, dirt back routes. Camping high in the mountains. I soaked in Banos deep in the valley with its thermal springs for a few days. I taught Texan Megan to ride a bike which unfortunately resulted in her back ending a pick up truck. We ditched the bikes and ended up hiking for a few days before I left for the Amazon. I spent a few days chatting with locals and hunting for a way in, in steamy Puyo. I got into the Ecuadorian delicacy of Turkish soap operas as Maria sheltered me and suggested a community that might take me in as an English anthropologist had helped them out a good ten years back.

They indeed took me in and I spent a good four days living the jungle life with a Shaur tribe, my integration was confirmed when they woke me at four in the morning to dance round a fire and drink wayhusha, a herbal, mildly hallucinogenic tea. The process then involved some skinny dips in the river followed by a jungle trek, thrashing at the bush with machetes to their holy place, accompanied by two little dogs, apparently to fend of the Tigers, yeah right. This was supposed to test my metal and I think I just about past. Lots of fishing and hunting before I left to take an insane back road mountain route back to the pan Americana. The quiet dirt road were incredibly peaceful but I was having to resort to lots of pushing. After about 8 percent the grades were too much and my tires would just slip and slide. Huge drops on one side on the decent were a little daunting and at one point I spotted a bus in the trees 400 meters below. I didn’t fancy the chances of many of the passengers.

I eventually arrived in the old Colonial gem of Cuenca, which unfortunately had become a little gringo retirement paradise. Only intending to stay the night I met Lauren and Michael, we got on, and there was football to be played so I stayed the week. I found a young German Spanish teacher who was biding his time so took on a week of Spanish, my exit was halted again as and Ecuadorian friend Mayra invited me to her mums place a couple of hours out towards the coast where we roasted coffee and tended to the Guinea pigs.I ended up staying with her for a while, working on my unlubricated salsa hips, Spanish and new found role as a ball playing centre mid. One out of the three went well. Mayra fattened me up good and true before I sped off, into the rain on the first day of Ecuadors winter.

Ground was feeling hard to cover with the mountains and so much to see so back to hitting targets. Only intending three weeks in Ecuador, is turned to six, and Peru laid ahead. Twice the size, with higher mountains and a bucket load of must sees. The road stopped dead after another gringo retreat in Vilcabamba and turned to dust again. This dampened the gringo influence and the hills turned absurdly beautiful. No traffic and eagles flying over head, snakes crossing the path and the road intermittently going through shallow rivers. Rides like this, however gruelling are so indescribably rewarding.

A day from the Peruvian border and another Latin American country to fall in love with. Ecuador had definitely impressed, a little calmer and more traditional than Colombia it definitely felt a lot more stable. A well developed infrastructure and public services the atmosphere felt a little less fraught and more traditional. The people more indigenous not as instantly curious as the Colombians were as warm and friendly as everywhere else down here. Anyways, I’m getting a little tired of trying to some up my experiences in writing so I tried to make a little video of my last few weeks in Ecuador. Enjoy some terrible camera work – https://youtu.be/Ta0w_pKXkUU