Yoaquin and Guadalajara introduced me to pulque, my new favourite drink. A type of sour beer made from agave, flavoured with all kinds of herbs and fruits which as I found later actually ferments inside your stomach, leaving little warning of when it hits you. Apparently going out of fashion Yoaquin insisted it was our moral mission to save it by chugging away, I wasn’t going to argue, an ethical incentive to drink beer. Clever lad. Unfortunately after night one I racked up my 4th bodily issue in as many weeks and with a bout of bronchitis found bed the only option. Yoaquin and his mother left town for the weekend and the maid seemed a little perturbed to find me still festering between the sheets. Still in classic Mexican style brought plate after plate of food as I rolled around making meek grunts familiar only to my mother, feeling pretty pathetic. I moved over to Esteban’s and spent a few more days in recovery there, I was getting a little fed up but Esteban’s mum wouldn’t let me leave until I was all there. After passing out I had to visit the health centre, more sleep, drugs and food was my program of recovery. I feel short of different ways to express my gratitude but to be taken in and looked after so genuinley is such a humbling experience and something I will carry. It also made travelling solo on a bike so much easier, feeling like I had the support of strangers, or rather friends yet known. Family’s a big thing for Mexicans and I was really made to feel like I had two in Guadalajara. Unfortunately I saw more of the HBO series Narcos than I did of Guadalajara but I managed a couple of day trips thanks to Esteban and Yoaquin, to lago Chapala, the biggest lake in Mexico and the circle pyramids of Guachimontones. I was so impressed with how much knowledge and pride both my new friend had/took in Mexico’s history and regional traditions at such a young age, it was kind of inspiring. At 20 I don’t think I even tied my shoelaces. 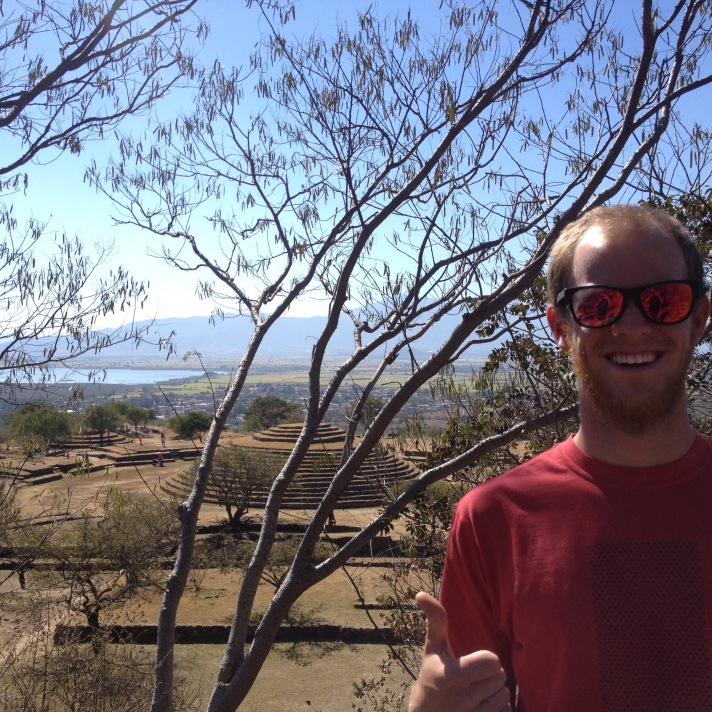 Finally got on the road again after antibiotics and racked up just over 10000 kilometres, the circumference of the moon. I couldn’t celebrate much as my lungs were still in tatters and took the next few days at a steady pace making my way to Guanajuato. Totlan, Ayotlan and Penjamo were three decent sized, head down, textile towns not used to tourists. The attention failed to bother me much and instead I enjoyed the opportunity to work on my Spanish. It was nice to have no sights to see and to concentrate on biking, sleeping, talking, getting better and eating of course. The food in this country is absurdly good, especially once I’d learnt to enquiry as to what was best. Such variety yet seasonal, particularly regional specific and always fresh that day. Tortas aghoadas, chillaquilles and sopes some particular highlights, not to mention roadside stands of strawberries and cream washed down with fresh coconuts or horchatta. Mexican generosity was again in full force as Maria gave me a free hotel room and a bottle of wine in Ayotlan when I told her hotel was nice but my tent was cheaper.

The following morning I rode under a sign worryingly welcoming me to Michoacan, a state I’d been told to and after watching the documentary cartel land fully intended to avoid. A vigilante group the auto-defensas, frustrated by government inaction had taken arms and had been trying to clear gang members from these towns. The military were unable to regain control of said towns, hence the group were legitamised by the government and subsequently infiltrated by the cartels they intended to remove. With the police, government and now a sanctioned vigilante group all being subject to corruption the state was a seemingly tense and unstable place. I saw forces of police officers ripping apart trucks looking for the prize and was eager to pass through. Wanting a break from camping I moved to a hotel which peculiarly listed its rates by the hour, the owner seemed reluctant to let me bed down there but at a fiver I insisted. Most Mexicans live with their parents and the ambience, or should I say lack of made it clear it wasn’t a hotel to sleep in. A bunch of police officers were there with their respective ladies, girlfriends or what not. I wasn’t sure but I was tickled by their romance as I read in the courtyard with chickens clucking around my feet. Eduardo, a podgy police officer with the most innocent eyes yet the dirtiest laugh bought me dinner as Raquel sat across from him chewing on her curly black hair, demanding his gaze. She insisted on rubbing my thighs which made impressing my new friend a little awkward as we attempted a bumbling yet amusing conversation about food and horses. I wondered how I ended up sharing laughs and a beer and burger with a police officer and for want of a better word his hooker in some dusty no name town in the middle of Mexico.

I stopped in Irapuato and ate an entire fried chicken in an empty football stadium with a couple of other football enthusiasts, I was looking for a quite place to digest in a loud, busy and dirty city. Little did I expect others to have the same idea as me. Davide and Toni took me down onto the pitch and we scored a few twenty yarder’s (not without skying a few) and shot the breeze in the dugout, they insisted I was now a Pumas fan which I guiltily agreed to. I was an Aztecs fan two days ago but the lads stated Aztec were a team of the elites and I was a man of the people, clever propaganda which I lapped up. A breezy afternoon through dusty mountains set me down in the city of Guanajuato or the city of frogs to the indigenous. The old silver town might well be the most beautiful city I have ever seen. An incredibly colourful array of colonial buildings extraordinarily climbed their way out of each side of a canyon. The roads twisted around numerous leafy squares and cut through the mountains through refreshingly cool tunnels through which rivers used to flow. A prestigious university city it also had a creative young vibe and was a good place to explore a few museums and galleries. I shacked up in a hostel as I was starting to think in my pigeon Spanish so wanted to speak a bit of English, I found a nice group of travellers in Matt, John, Carlos and Yanalte and we made full use of some decent nightlife.

Next stop Dolores Hidalgo, where Miguel Hidalgo issued the call for independence on the 16 of September 1810. My namesake, and the recent owner of a local gym Roberto showed me around and talked me through the key 8 events leading to the declaration independence. I felt so inspired by people’s knowledge and interest in their countries history. The amount of statues and reminders I had come across through my journey through Mexico couldn’t help but fuel my interest. The pinnacle of Roberto’s pride for his hometown however involved me trying the infamous Tequilla and Beer ice-cream which I can’t lie, was putrid. I slept in the gym that night and was woke at seven by a soul destroying Mexican remix of “Let’s get it on” blasting from the loudspeakers. I wearily opened my eyes to find a pack of ladies pedalling like crazy as Roberto introduced them to the delights of spinning which has to be the most ridiculous form of exercise possible. It was also Not the reminder I needed. Still look on the brightside, encouragement for an early start. 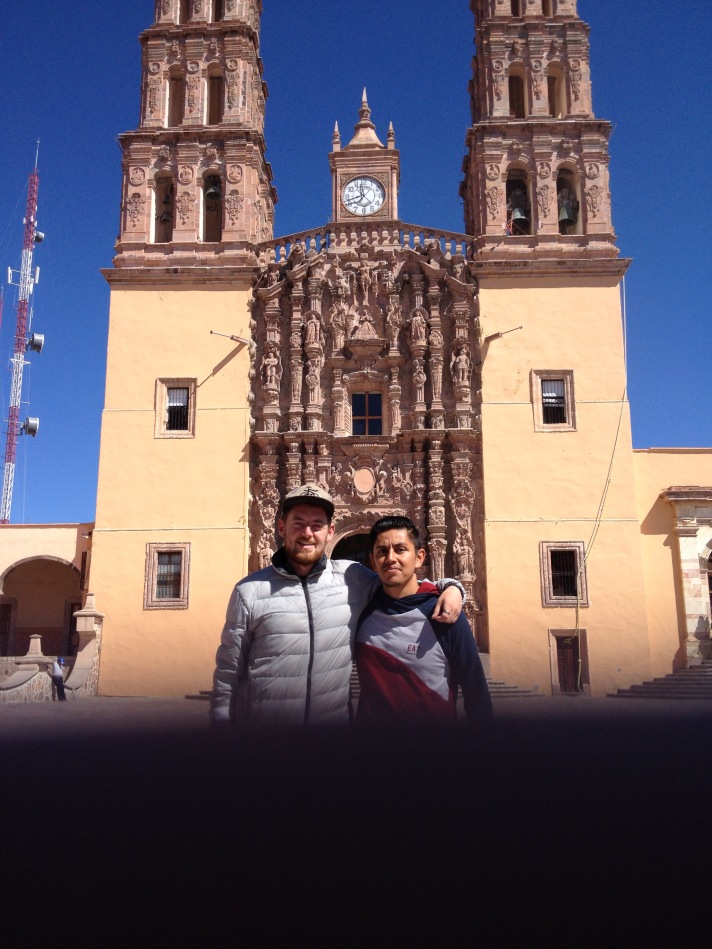 An easy 60k took me to the crafty San Miguel de Allende, another stunningly beautiful, yet slightly defunct Historic town. Yanalte whom I’d met in Guanojuoato, insisted I returned to Spanish and we explored the city which was being worryingly invaded by American and Canadian retirees, attempting to talk of its history and art and the prospect of completeling the journey on a horse. We invaded an opulent Americans art gallery opening to indulge in complimentary mescal. It didn’t seem to be a drink you ever had to pay for.

From San Miguel I peddled south into the state of Queretaro en route to Mexico City and things were notably getting busier. The decent sized but “buenas vibres” of Santiago de Queretaro provided a good stop off. Considered the most liveable and middle class city in Mexico, it was abundant with cool bars, fancy food and shops selling things like dog neckerchiefs, the true indicator of social progress. I stayed in the old historic centre which had a unusually palatable past, one in which the Spanish had planned the city side by side with the Otomi, Tarasco and Chichimeca (the indigenous population). This resulted in an interesting mix of traditional grid and square planning, combined with twisting ram shackle alleyways. The atmosphere of sophistication and cleanliness was attractive however it seemed to lack a little of the Mexican energy I had been enjoying. Thanks to the casa del cyclistica a days rest of the rooftop reading and playing guitar was welcome. I chilled with Yaz, Roge and Alan, three Mexicans on route to the Yucatan from Guadalajara before they sped past me the following morning.

The roads weren’t sitting pretty at this point so I put my head down for a gruelling 200k on a motorway which started as,3 lanes and ended up at 8 by the time I hit District Federals periferico. I was told it wasn’t a good idea to try and ride into the city of 22 million people but having ridden all the way so far it didn’t feel like the time to give in. As traffic ground to a hault I wove my way between trucks and buses, a young chap on a bike told me to follow him which I did until he started grabbing hold of the back of pick up trucks and was lost to the vista. Safia had put me in touch with Jose who lived in a pueblo just inside of the ring road of Mexico City and I rocked up with half the job done. Mama Magdalena and I chatted the night away before Jose arrived. Sipping German wheat beer (Yes Jose) we went up on the roof as the sun went down. The lights of downtown flickered and pulsed in the distance, framed by the magnificent mountainous bowl of a former lake bed Mexico City sits within. I felt that my field of vision had been miraculously extended to accommodate such a vast incomprehensible sea of lights. Various mountains protruding through the absurdly huge cityscape, it’s hard to describe how awesome a sight it was to behold. 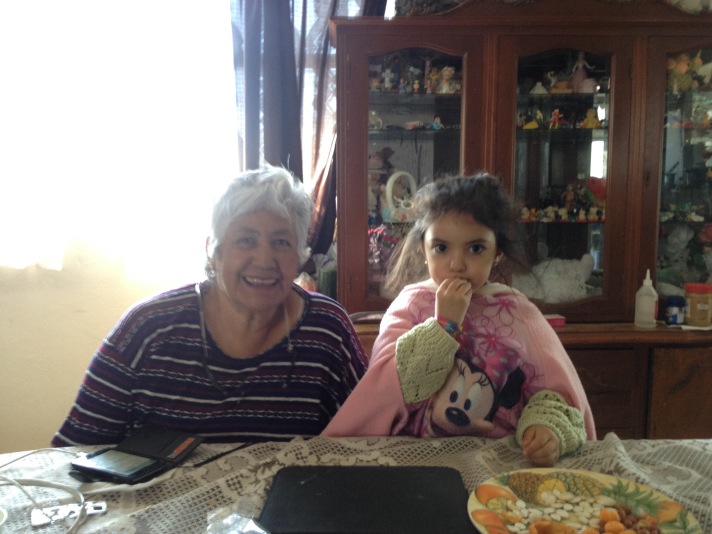