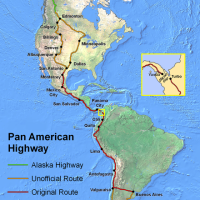 From Whitehorse to Terrace, the Cassiar and BC.

It was a relief to be relaxing again in Whitehorse, a pleasant town with a lovely waterfront park spanning the length of its shoulder on the Yukon river. The city and surrounding area seemed to have a pretty active, creative community for such a sparsely populated region. Anthony helped tune up my bike, cooked bison sausages, we hung out and he updated my reading material. I then coasted 40k down the road to stay with Peter and Gilles in an incredible house, right on the banks of marsh lake. Gilles had met Peter in planning a trek through the northern Yukon in the depths of winter, pulling their load by sled. Peter had since welcomed Gilles to stay and work with him and work together building log cabins, they seemed to have developed a great friendship which was wonderful to bear witness to. I was welcome to use the kayak to peruse the lake and fish from the jetty. My abode a sauna cum spare cabin that Peter had built, he’d even built his own houseboat sporting a Cuban flag. Having passed through Cuba many times with his bike, we shared an enthusiasm for the country, planting a seed of some premature re-routing for a revisit.

I didn’t much feel like leaving but the others were heading to a festival for the weekend. The offer of an opportunity to join them as volunteer was painfully tempting but a rendezvous in Vancouver was on my mind and I was eager to push and see how much land I could cover In my first month, to better judge the rest. As much as I was enjoying the wilderness and my backcountry skills were improving, fast (I could now distinguish between bear and fox shit, moose and wolf footprints), I had over 1000 miles before I would start hitting proper amenities. I stopped at a restaurant at the junction with the turnoff to the festival as legend informed me of their enormous cinnamon buns and was served by a young polish lady. She picked on my accent and grateful to meet another European asked if I was heading to the festival. She said she could get me some work there and rest and free food was filling my mind however her bosses phone was off. She invited me to wait on and drink through their coffee supply but I semi-reluctantly pushed on.

That evening, finding a superbly picturesque spot over looking the absurdly impressive swan lake (yep) I was idly cooking my dinner when Margaret and Warren approached. They told me they were looking for moose on the lake and pointed out what I thought were rocks. I’ve never been much impressed by wildlife but moose, those things are crazy! Warren and Margaret were of First Nation origin and Warren proceeded to call the moose, I chuckled at his attempts until to my surprise they responded, he shuck his head at my insolence. He said he was waiting for the fall to hunt the moose and these would last the family all year. Warren had incredible vision and pointed out a bald eagle in the distance and showed off the 15 salmon he has just pulled from a nearby river. We shared fruit and canned glucose fructose syrup, yes. The anti-sugar brigade should try cycling 8 hours a day before they insist on belittling the wonderful white crystals as the killer of the twenty first century. 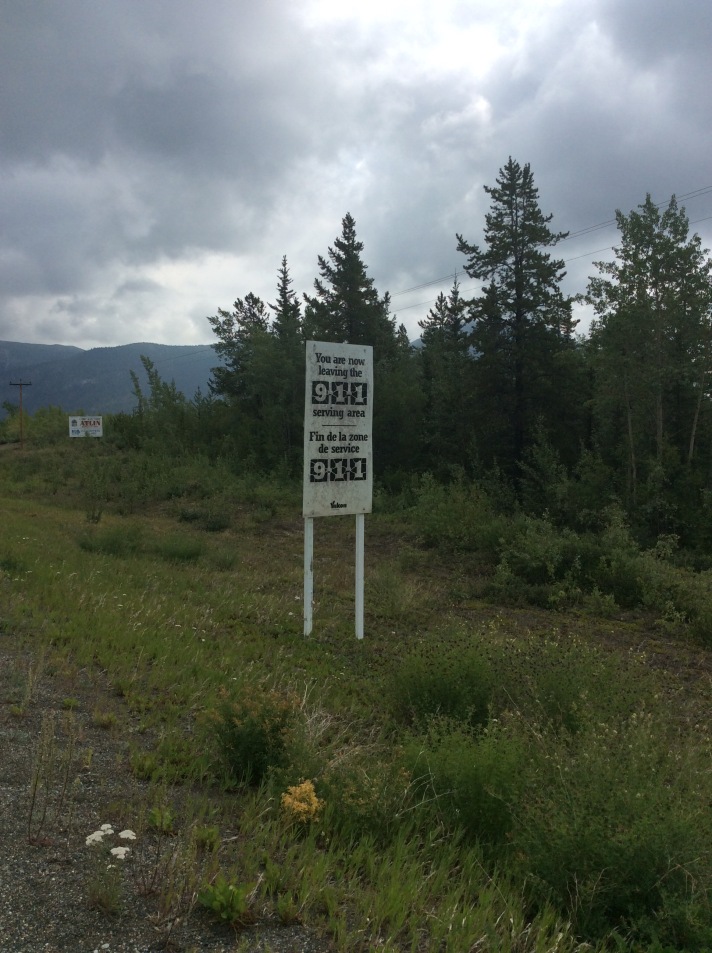 I hadn’t planned a route through Canada and had been speaking to everyone I could about the options. Continuing east on the Alaska highway was longer, but more established, with more amenities, though described as a slog by motorised travellers. More direct was a minor road south, the Cassiar, apparently more impressive, hugging the mountain range but with steeper grades, unpaved stretches and only one town for 500 miles. Effectively riding through a grizzly sanctuary but giving me the option to ride all the way down Vancouver Island, which I’d heard amazing things of and had offers to stay. I liked the idea of another challenge and heading northeast to travel south did not appeal. I was feeling much fitter despite my perpetually sore arse that I was assured would toughen up. Last days in the Yukon were characterised by limitless picture perfect lakes to wash, eat and camp by and frequent thunderstorms in which rather than donning waterproofs I had taken to removing as much clothing as possible to dry out quicker. The road was easy to make progress on granted me at least a daily hot-meal, pretty much always a burger. The amount of food I was consuming was getting silly. One one day I managed; porridge and banana for breakfast followed an hour later by a fry up with pancakes from a cafe, 14 hot cross buns from a pack of 16, A litre of chocolate milk, an-entire box of cereal bars, packet noodles and then rice, carrots and tuna for tea followed by protein bar desert. Only impeccable self control stopped me from eating the remaining 2 hot cross buns, saving them for breakfast.

The weather blessed me with my first blue sky/bright sunshine day for a good while and I spent an entire morning waiting at a petrol station at the junction with the cassiar. 22k ahead lay Watson lake with shops and beer and food. I had already eaten through half of my 10 days food supply. I spent a good few hours pondering which road to take, unable to make the decision after a few dubious ones the previous few days. I wasn’t sure if I had the food to head south but didn’t fancy the detour either, alternatively I could continue on the Alcan for a longer yet easier ride. A lone motorbike crider pulled up and asked the most typically uninventive question on the roads, “where you heading”? In a desperate attempt to impress I pointed down the unmarked track, “your not going to do the cassiar alone on that” he remarked. I suggested we swap vehicles. He laughed and offered me a saddle softener (a beer), we drank together and he wished me luck. My decision had been made so I pulled the counter assault magnum 290 (bear spray) out of my panniers and taped it to my frame and put on my iPod on shuffle and set off down a road which looked like it was being swallowed by the forest and crossed from the Yukon into British Columbia. 5 minutes in and cruiser by red house painters came on and feeling buoyed by the empty winding road, sun on my face I confirmed to myself I was happier on my bike than I would have been straddling an engine. 10 minutes after hitting the most ridiculous climb I had encountered I wished I was straddling an engine. 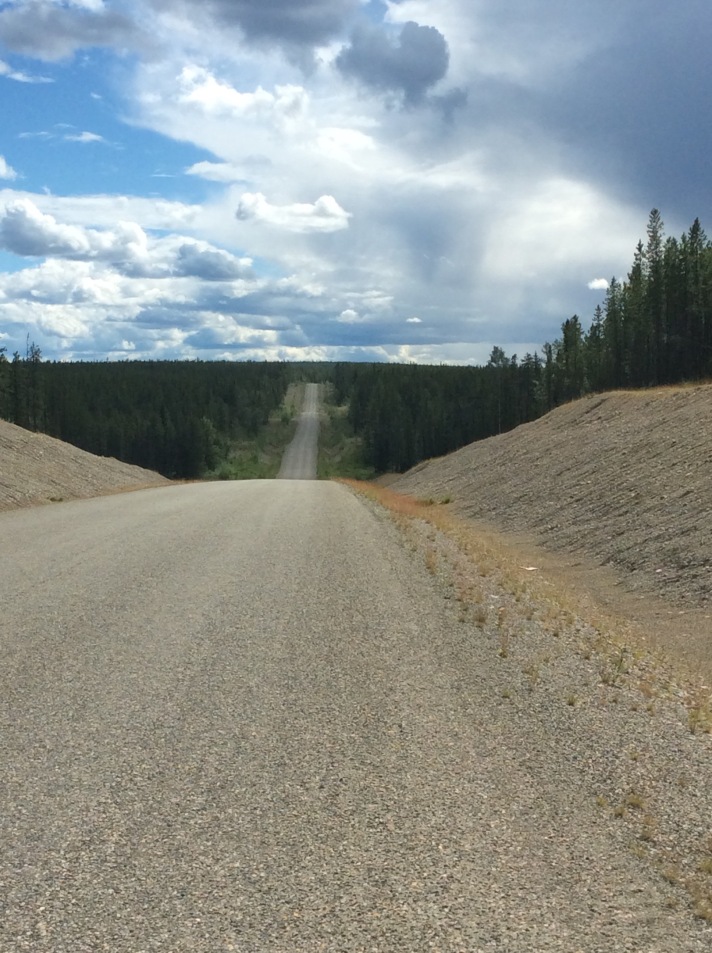 Each day there were moments I was hating on the bike coupled with moments of amazing serenity. This became such a pattern that it became much easier to deal with the moments when I wanted to throw my bike into a lake. Something about recognising a psychological pattern like this and being able to deal with it felt like an accomplishment and riding through the tough parts got much easier. Strangely I found that the tough climbs and lack of amenities made riding a little easier. I would set smaller goals and focus on more immediate targets. Stretches on long, flat, easy road seemed more of a challenge of endurance as my mind would wander much further ahead. 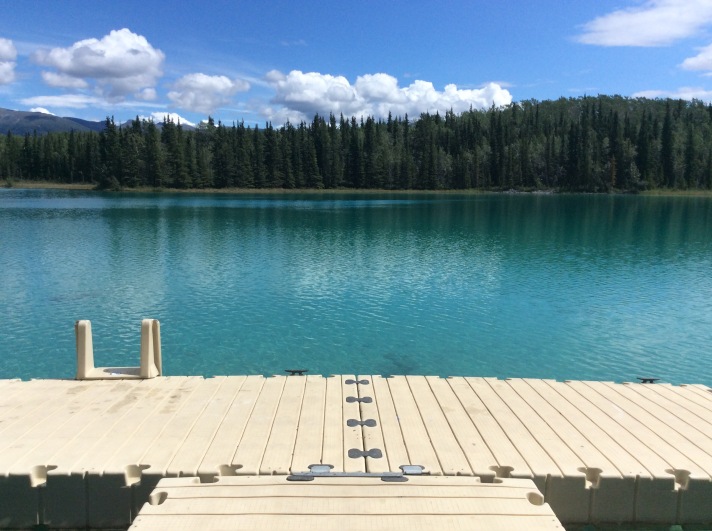 The Cassiar did not disappoint. Yet more lakes, many of them crystal clear turquoise, feeling more like the Mediterranean than northern Canada, surrounded by snow capped peaks with log fog shelves wonderful to cut through in the morning dew. The road taking unpredictable turns through landscapes that were hard to grasp was constantly entertaining made for joyous riding despite its sketchy surface. The colours colours and smells were more varied than further north. Black bears were abundant and it became hard to think of them as dangerous creatures. I thanked a construction worker who was patching up the road for his efforts at polishing a turd. Needless to say the expression did not translate. I explained myself and he invited me to camp with him and the other road workers that evening. They caught some trout from the river which we cooked up with bread and told me of the money I could make working on the roads, we laughed at the amusing prospect of an unlikely turn of events for my attempts to cycle south. 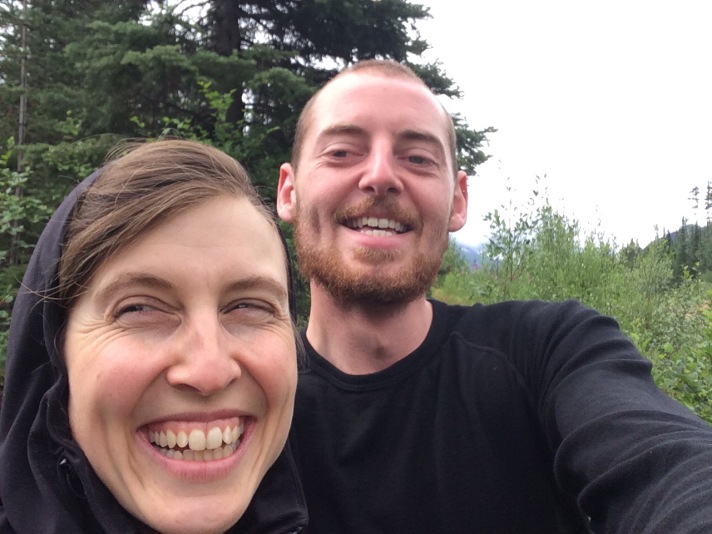 Though enjoying the road I was starting to tire when Jen passed me on route to visit her parents. We shared coffee as we watched a young moose pass on the road just in front of me. Knowing I was taking the route she brought fruit, cold beer and the most amazing homemade chocolate energy bomb things which spurred me on. Later that day I bumped into Slav and Yana, two Bulgarian cyclists who were taking part in a recycling project. They were taking this impressively seriously to the extent of cooking up rabbits they found on the roadside. We cycled together and couldn’t believe our fortune when in heavy rain we stumbled upon an unlocked hunters cabin, equipt with huge stove, condiments galore, beds and invitingly a guest book on the table. Yana made Bulgarian bread and we felt like kings. Some cycling company was welcome for a few days until our routes diverged and Yana and Slav were good fun to hang with, I was ever impressed with their resourcefulness as we camped on am active airstrip one night. Glaciers slid from the peaks high above the road and fresh strawberries and saskatoon berries replaced peanut butter in morning porridge.

July 17th arrived, a month on the bike now. Some stats:

4 nights in beds, 1 under a bridge, 2 in abandoned cabins

1 frustrated kicking of my bike

After covering some really good ground I promised myself to slow down a little and give myself more time off the bike. And then the next day I did my first 100 mile day accompanied with punctures. I’ve covered 100 miles on a bike before but not fully loaded with 12 degree grades. This resulted in me collapsing into a bush at one point and catching 40 winks. Needless to say, I won’t be doing that again. As the Cassiar ended I joined the yellow-head highway for the last stretch to terrace following the Skeena river, the largest undimmed river in North America. I found myself really falling for British Columbia which was so beautiful with every twist and turn. Unfortunately I lack the lexical eloquence to capture this and this iPhone camera lacks the optical eloquence, I’m sure Google image would do a better job. I was welcomed to Terrace by Amy, Matt and their two children Liam and Finley who had just completed a tour of Europe, South America and the west coast of the state’s, the young ones being carried in carts behind the parents. Sitting back in a cart, dozing off, this I wanted to try! 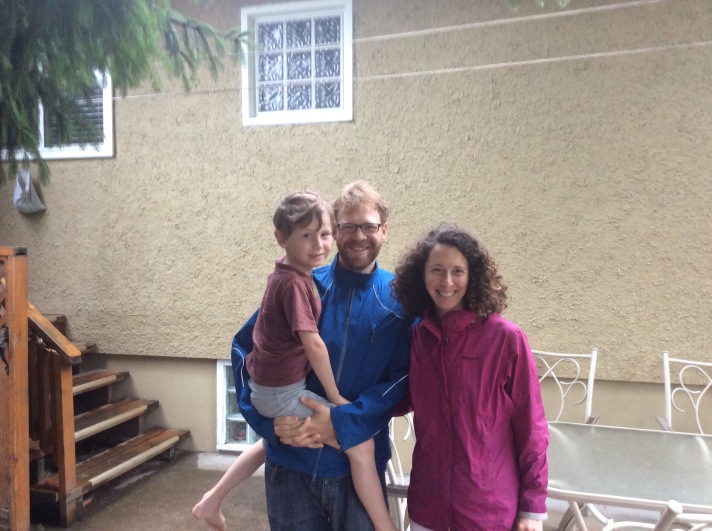